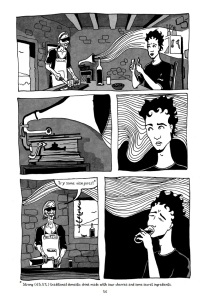 A whirlwind story by Kostja Ribnik, but with a clear idea, depicting a meaningful elaboration on choosing a path in life, accomplished with the heart of a promising story teller and the hand of a real draftsman.

Ribnik is most poetic in the silent scenes, in the beautiful scenery and views of deserted streets, bugs and plants, and details like a lizard on a tombstone or a reflection of the birds in a cup of coffee. (Pavle Zelić, writer and comics critic)

I can say with ease that this is one of the best Bosnian comics ever produced, and in such a small country of only 3.5 million people, it is rare to see such maturity of style and expression, and also productiveness that Kostja continues to exhibit. (Emir Pašanović, script writer and comics critic, from his critic at Bleeding Cool, http://www.bleedingcool.com/2014/07/10/summer-reading-an-original-bosnian-graphic-novel-in-the-healing-island/) 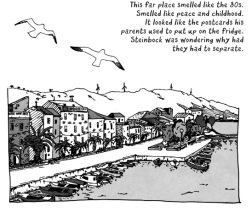 Steinbock is a bit of lost soul, solitary for sure, but not unwilling to engage, not combative to other humans. He has the room and potential to grow, and the willingness to let things happen organically, making for a pleasingly zen comic.