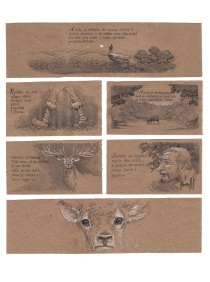 Gajic made his name and popularity with futuristic and adventurous comics, in which his ability to draw unusual space crafts and landscapes, poetic and immense at the same time, and beautiful, but strong and sophisticated women, was flourishing. However, he didn’t want to stay repetitive and went and made an animated movie, and nowadays prefers to experiment even further by drawing unusual comics on different materials.

Here, he is represented with his two short stories, both of them dominated by his lyrical soul and sepia colours. In the first story, Rewinding, which should be read with the drawings connected in a circle (awarded as the best comic at “International Comics Festival” in Belgrade in 2012), Gajic reflects on the transience of human life. In the second story, A Hunting Story, Gajic contemplates on the purpose of life.