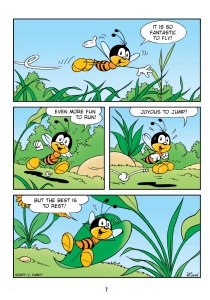 Noble and kind comic pages from the world of small animals by Zdravko Zupan.

Through his life experiences, Zuzuko the bee has, for four decades now, explored social and emotive realities for our youngest readers in the regions of former Yugoslavia. With him, the world of early childhood got its mental safe habor in a series full of compassion and innocence, maturely drawn and in the spirit of Disney. A classic of our era. (Zoran Stefanovic, writer and comics critic)

This charming, simple and warm character has spontaneously entered the memories of children across Serbia. Personally, I saw how a few children outside a primary school on the outskirts of Sombor took it in turn to compete in drawing the best image of Zuzuko, with chalks on the pavement. (Slobodan Ivkov, essayist and comics critic)

In these short and funny comic strips, the message, if there is one, is always discrete, and the jokes natural and inoffensive, aiming to make people smile and laugh. This captivating strategy contributes to the pleasantness of the comic strip – Zuzuko is both easy on the eyes and food for the soul. (Vasa Pavkovic, writer and comics critic)