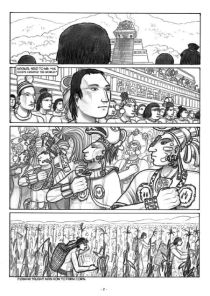 It is a collection of short stories by Ruzic and Horvatic which take place in different countries and at different time periods, but always with deep interest in people’s motivation to live and act.

You are not a writer when your writing lives in a draw. Because of that, my stories were nothing until Hrvoje. They were transformed in a strange and unexpected way into comics. (Miljenko Horvatić, comics sriptwriter)

This album consists of five very different stories which occur in different spaces and times, from Central America during the period of an ancient kingdom, to modern times and a nameless island in the Adriatic. (Zoran Ferić, writer) 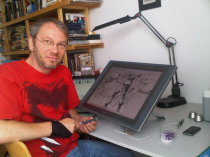 Miljenko Horvatic, the scriptwriter of this book, was born in 1966 in Zagreb, Yugoslavia. In 1991 he started his work as an animator in Zagreb Film and a comic artist for German publishers. Since 1994 he has been working as a professional script writer for comics for Croatian and American publishers. Some scripts that he develops are new stories for well established series and some are independent stories. Miljenko lives in Zagreb with a wife and two kids.