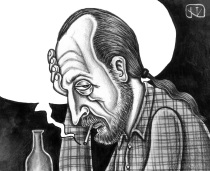 Vladan Nikolic (Nikolić) was born in 1968, in Zrenjanin, Yugoslavia, where he now works and lives. He started drawing comics in 1998 and published them in comics magazines in Serbia, France, Holland and USA. He had four individual exhibitions of comics, caricatures and illustrations. In a Slovenian magazine for children “Ciciban” he draws a series “Igor the Cat”, with his own script. Two animated movies, based on his comics, have been made.