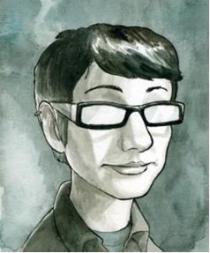 Hannah Berry is mostly a graphic novelist, but also a writer, illustrator, occasional lecturer and editorial gun-for-hire, as well as having been three-times tutor for the Arvon Foundation’s Graphic Novel Writing course and Booktrust’s seventh Online Writer in Residence.

Her first graphic novel Britten and Brülightly was begun while studying an illustration degree at the University of Brighton and was subsequently published by “Jonathan Cape” in 2008. It has been translated into Italian, Dutch, Serbian and French, with the French edition chosen as part of the official selection for the 2010 Angoulême International Comics Festival. Her second graphic novel Adamtine was published in 2012, also by “Cape”.

She has exhibited her works in solo and collective exhibitions and written for publications including New Statesman, Dazed & Confused and Huffington Post UK.

She lives in Brighton with a cat, a tortoise, and a beloved Frenchman.

Her graphic nodel Britten and Brülightly, could be bought from http://www.randomhouse.co.uk/browse/graphic-novels/

You can find more about Hannah on her website http://hannahberry.co.uk/