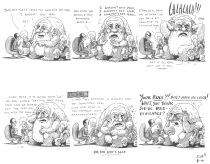 Lunacek is a capable and strong evaluator of either human, animal or Godly characters. He is courageous and sharp to comment on many controversial topics (religion, politics, history, sexuality) in his unique combination of grotesque but likable creatures and relaxed conversation. Lunacek’s drawing style sometimes reminds us of Jean-Mark Reiser, a French comic artist and cartoonist from the sixties and seventies, or Ninoslav Kunc (Mister Pierre, Shadow) from the late seventies, but he is overall a talented and original artist. He also has a rare ability, never praised enough, to make us laugh from the heart.