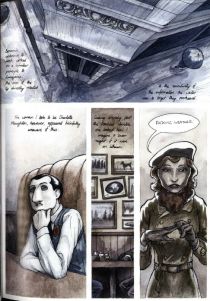 Fernandez Britten, a private investigator, would rather be called a 'private researcher'. Tired of years spent dragging people's unpleasant secrets to the surface, the only thing which keeps him going is the hope of one day unearthing a happy resolution along with the truth. In that vain hope, he takes on the case of the suicide of Berni Kudos, whose fiancée Charlotte Maughton refuses to believe he would ever have killed himself. In its round-up of 2008’s graphic novels, “The Times” called Britten and Brülightly 'effortlessly Book of the Year', praising Hannah Berry's 'perfect marriage of soaringly beautiful drawing and writing’.