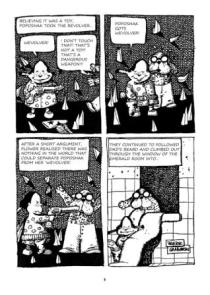 A collection of short stories by Wostok and Grabowski, in which they tried to escape from the harsh reality of the civil war in Yugoslavia in the nineties of the 20th century. Some stories are fairytale-esque, some are fantastical adventures, but they will well intrigue you by some poignant aspects.

Wostok’s entire oeuvre is based upon improvisations across the three thematic fields, two of which he created together with Grabowski: the theme of children’s poetical metaphysics (Poposak and Flowers) and the theme of melancholy, as well as the third thematic field – the mockery of comic book heroes and the ‘heroes’ of the political landscape of the Balkans, steeped in overpolitization in which life and culture lose their value and, at the same time or maybe just for that reason, everything becomes ‘untouchable and saintly’.(Zoran Djukanovic, comics essayist, from the introduction of the book)

Grotesque and black-white humour in the collection of stories The Nineties abounds, and there is an impression that they have emerged from vivid nightmares or in collaboration with the bizarre brothers Coen, who would be able to make at least a short film from every story. (Miroslav Cmuk, comics critic, from the introduction of the book) 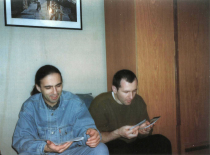 Wostok's co-author on this book, Borislav Grabovic (Grabović) – Grabowski, on the photo with Wostok, was born in 1970 and in the nineties of the 20th century he intensively collaborated with Wostok in drawing and writing comics.