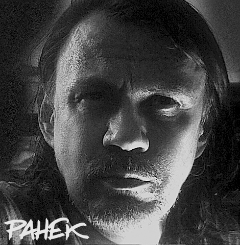 Zeljko (Željko) Pahek is a cartoonist, scriptwriter, illustrator and caricaturist.

Pahek was born in Yugoslavia in 1954 and now lives in Belgrade, Serbia. His professional work in comics started in 1979, when he began publishing comics in all major comic magazines in Yugoslavia. Since 1988 he publishes comics with his own scenarios in magazines such as: "L’Eternauta" - Italy, "Zone 84" - Spain, "Schwermetall" - Germany, "Fluide Glacial" - France, "Ten Ten" - Belgium, "Eleftherotipia" - Greece and "Heavy Metal" – USA. He is represented in the comics collections "Heavy Metal Special Editions" for 15, 20 and 35 years of publication.

His comic "Die schwarze narbam" ("Black Scars"), dedicated to the destruction of the Berlin Wall, in the book "Durch bruch” (“Breaktrough”) from 1990 was published in 13 languages.

From 1982, Pahek works for many publishing houses as a front page illustrator for science fiction and fantasy books from the writers such as Robert Heinlein, Philip K. Dick, Arthur C. Clarke, Douglas Adams, Terry Pratchett and Tim Powers.

Domestic readership knows him for his black humoured comic series "Astro-idjani" and "Legions of Impermeable" and from his numerous caricatures, published in a collection entitled "Removal of the Brain".