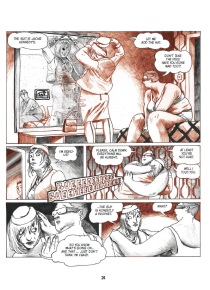 This story by Damijan and Lucija Stepancic starts as an ordinary, contemporary "piece of life", but turns into a modern, fantastical narrative with leading female protagonists.

Lucija and Damijan Stepancic have made a really rare thing, an intelligent graphic novel with women in the lead roles. These women seem real and ordinary, but at the same time they expose, through their thoughts and contemplations, deep emotions and complex psychology. (Pavle Zelic, writer and comics critic, from the introduction of the book in English) 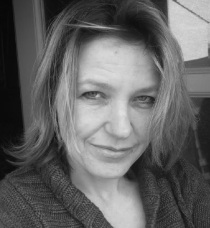 Lucija Stepancic, a scriptwrieter of this book, was born in 1969, Kranj, Yugoslavia. She graduated from the Academy of Fine Arts in Ljubljana, Slovenia.

Her first book of short fantasy stories (The Dead and Chansons) was published in 1997, and the second (Such a Pig) in 2008. In addition to a novel (At Six on Thursday), she has written several books for children (Scribble Robber, Small Lizard and Dinosaurs, On the Island, How They See the World, What the Words Say and Anton! - the true story from World War II). For years she continuously publishes comic columns for the magazine Literature. The comics The Tempter (Trbovlje) was published in the magazine Mladina.

With The Tempter, Lucia starts a trilogy of stories, which occur in small towns in Slovenia. After Trbovlje, a mining town where suddenly the Tempter appears, comes Bohinj, which brings a different atmosphere with its beautiful nature and touristic potential, and Ptuj, a well-known Catholic’s pilgrimage destination. In these stories she explores the potential of a peaceful province to contain something mysterious.