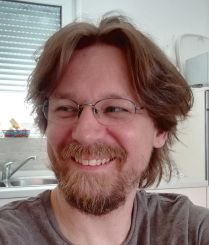 Tihomir Čelanović was born in 1977 in Belgrade (Serbia). He grew up in Kotor (Montenegro) and graduated in 2001 from the Faculty of Applied Arts and Design in Belgrade. His comics were published in many magazines in Serbia and abroad. He illustrated many children books in Serbia.

His first comic album “Eudora – Sound comes with the dawn” was published by MAH in 2002 in Serbia, and in November of the same year by Medicina Nucleare in Italy.

Illustrations for “Fables” by Radomir Putniković published by Kreativni centar won the “Neven” award in 2007 in Serbia.

Publisher Septieme choc from France released an album “TAXI”, based on characters from Luc Besson’s film. The album was presented at Angoulême International Comics Festival in 2008.

Short comic “As if you don’t know?” won the first prize at 8th International Comics Festival in Belgrade which took place in October 2010.

“Le Diurne – Wolfel Von Ulf” was released in 2011 by 12Bis (France), written by Eric Corbeyran, coloured by Nikola Vitković. A collection of short comics “Modern mythology gives birth to all kinds of monsters” was published in 2013 by System comics in Belgrade.

In 2014 he married Marta Čelanović (ex Vlahović) with whom he formed a band Alhambra and a family with daughters Lena and Ema.

Some Comics in ENGLISH: