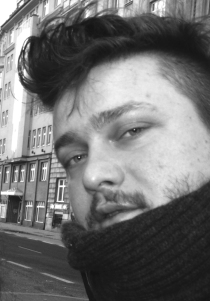 Kostja Ribnik was born in 1979 in Bihac, Yugoslavia, where he graduated from the High School of Arts. Subsequently, he decided to be a musician so he played in a few ‘free jazz’ bands as a mandolin player. In the past ten years he became an avid music record collector. In the winter of 2012 he started making comics and publishing them online and in paper by “Stripnjak Comics” from Sarajevo. In 2014 he published his graphic novel The Healing Island with "Modesty Comics" as an ebook. He lives in Sarajevo, Bosnia and Herzegovina, and you can read his comics online and follow his blog on http://www.kostjaribnik.com/

The Silent Flight of a Seagull