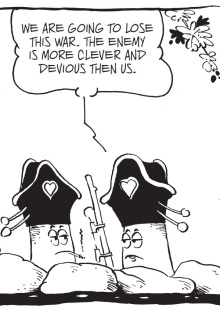 Dušan Vukojev - Duda has created several characters whose origins are difficult to decipher. Koko is not exactly a rooster, Screwer is not exactly a robot, Rundi is an unusually large dog (or maybe a man disguised as a dog since he can speak), and Schufnudles are German-noodle-shaped alien beings in earthly situations (rather like Mordillo’s celebrated protagonists with their peanut-shaped bodies or the cylindrical and yellow Minions). However, all of Duda’s characters share some common traits – they are indestructible (already a common case with most cartoon characters), not bound by time, naive, well-meaning and always in the mood for a good joke.

Our view of Schufnudles is almost always frontal. They are right in front of us, no perspectives, exactly in our line of sight, which makes us feel a part of the joke. Schufnudles live in all geographic areas and in all historical time periods, do not have names and are not personalised, and give the impression that behind them there is a creator with the soul of a child, or at least someone who wishes well to our planet and its inhabitants, even when they are in a very strange biological form.