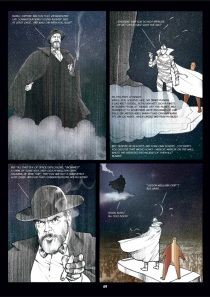 Captain Nitrate: Short(?) Cuts is a collection of episodes 3 and 4 of Captain Nitrate who is fighting to save nitrate films and global cultural heritage, drawn by Sotirovski and written by Stanojevic.

Script writer Stanojević wrote a comic that, in its consistency with sophisticated graphic manner of Sotirovski, is contained within three "L" word checkpoints: Lucid, Lavish, and Lunatic. Authors made every effort count in making an enviable, philosophical, esthetically artistic comics book. (Todor Jovčevski, writer, editor and critic, from the introduction of the book in English) 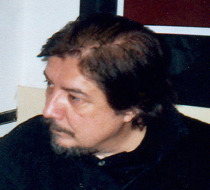 Borislav Stanojević (1953-2015) was born in Belgrade, Yugoslavia. He was a scriptwriter of Captain Nitrate.

Stanojević was the Head Librarian of Yugoslav Film Archives in Belgrade. He was an author of a number of stories, novels, libretti, plays, screenplays for feature, experimental, documentary and animated films, scripts for graphic novels, comics, TV and radio programmes and critical essays for numerous magazine and newspapers on various subjects. He was also an author of a number of instrumental musical compositions, incidental music, music for film and TV, one TV musical (The Gang of 5 Roosters) and the first TV children’s opera (Gurije) in former Yugoslavia. Occasionally, he translated fiction, poetry, philosophy and medicinal astrology.

The book can be also bought in an electronic format on Amazon, DriveThruComics, comiXology and MadeFire in different electronic fomats and at a higher price.

The book can be bought as a papare book on Amazon.