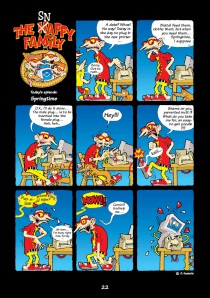 This is a collection of comic pages by Dusan Kastelic from the late 1990s, where he explores our obsession with computers through colourful chracters and the anthropomorphic computer itself.

Anyway, the crazy adventures of an ugly, dysfunctional family and their computer found an avid readership. And, all of a sudden, there were enough episodes to fill a whole comics album! So we have no other choice than to publish the darn album. Enjoy! (Nikolaj Pečenko, bilogist and comics fan, from the original album from 1999)

The author parodies situations that could be seen everyday, for years, in many homes, because most homes have at least one computer; and if it is ‘just’ one, the war can break out. (Andrija Mihajlović, comics critic)

The book can be bouth as a paper book on Amazon.