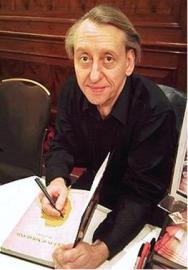 Bryan Talbot was born in 1952 in Wigan, Lancashire, UK. His first published illustrations appeared in “Mallorn”, the British Tolkien Society Magazine in 1969. His career since then has been sprawling; ranging from underground comics to the epic saga The Adventures of Luther Arkwright and its sequel Heart of Empire to producing works for DC Comics. In December 2007, NBM published The Art of Bryan Talbot, a collection of some of the many magazine and book illustrations he produced over the past thirty years.

Bryan has held six one-man Comic Art exhibitions in Lancashire, London, Tuscany, Finland, Sweden and New York, appeared in numerous others and is a frequent guest at international comic festivals. In 1998 he taught a five-day comic course at Ouro Preto University, Brazil, and in 2004 he lectured at the Comic Art School in Florence.

In 2000 he received the annual San Diego Comicon Inkpot Award for ‘Outstanding Achievement in Comic Arts’. In July 2009 he was awarded an honorary doctorate for his ‘outstanding contribution to the Arts as writer and graphic artist’ by Sunderland University.

You can find more about Bryan on his website http://www.bryan-talbot.com/

Ebooks and paper books in Serbian