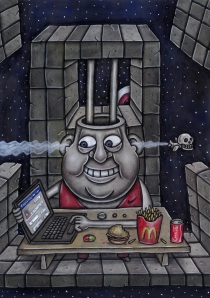 In his caricatures and illustrations, Nikolic discovers the truth about our contemporary society. He is a cool assessor of the situation and committed resistance fighter, but never crosses the line of lasciviousness, does not call the names of individuals, and shows problems predominantly as metaphysical ideas.

Vladan Nikolić (1968) brings into our service his vulnerability and his sensibility which are higher than that of ordinary people. The ethereal demonic influences in our everyday day are hurting him, crystallize his resistance, which is then personified in the drawn images. Sometimes these images are only conformation of the situation and (black humoured) acceptance, but more often they reveal the essence of the problem, trigger a wave of dissatisfaction and start opposing and, finally, conquer against inappropriate elements. (Zivojin Tamburic, editor and comics critic, from the introduction of the e-book in English)

Nikolić is a versatile creator - awarded and published in several European countries and the United States - he shines as a cartoonist, illustrator, painter, animator and graphic designer. (Zoran Stefanovic, writer and comics critic)