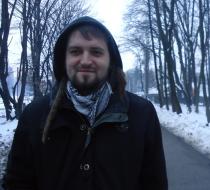 Marko Djeska (Dješka) was born in 1983, in Osijek, Croatia. His degree was in animation and new media at the Academy of Fine Arts in Zagreb, completed in 2011. He drew comics from a young age, but as a professional he started in 2010 by publishing many short comics in a magazine called StripOs, Croatia.

In 2012 he won an award for the best young comic artist at the traditional comic festival “Salon stripa” in Vinkovci, Croatia, and in 2013 he won the 2nd award for the best comic artist on the 15th “Balkans Festival of Young Comics Creators” in Leskovac, Serbia. Along with animation and comics, he is an illustrator, animation director, scriptwriter and storyboard artist. He lives in Zagreb and Osijek and currently spends a lot of time in residencies across Europe while he is working on the preproduction of his project for a TV series/comic/video game.

You can read more about Marko on his website www.mdjeska-animation.hr