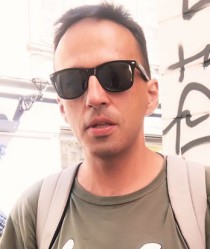 Danilo Milosev (Milošev) – Wostok was born in 1963, in Vrsac (Vršac), Yugoslavia. He worked on alternative and underground comics that he published in his own magazines, which were photocopied and distributed by enthusiast. His most popular magazine The Tick (Krpelj") has reached 460 issues. His unconventional works also cover movies and music, in collaboration with some of the members of his own family. In 1998, Wostok and his colleague Grabowski published an album Daddy is so far away…We must find him! for the British publisher “Slab-O-Concrete”, with the forward by Jim Woodring.