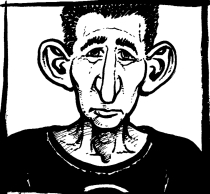 Mladen Oljaca (Oljača) was born in 1970. He lives and works as a freelance illustrator, cartoonist and comic artist in Novi Sad, Serbia. Since 1996 he has collaborated with several newspapers, magazines and Radio Television Vojvodina. He has illustrated a large number of books, from poetry to technical instructions to children’s books. He has participated in about 40 group exhibitions and two individual ones. He has won 6 awards for his comics and illustrations.

You can find more about Mladen on his website http://oljacamladen.blogspot.co.uk/