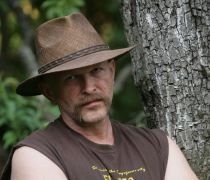 Igor Kordey (Kordej) was born in 1957, Zagreb, Yugoslavia. He started his career more than 30 years ago and he is now the most prolific and most successful comic artist and illustrator in the region. Out of the many comic publishers he worked with throughout the years, it is worth mentioning Heavy Metal magazine, Marvel, DC Comics, Dark Horse in the USA, and Dargaud, Humanoides Associes, Ehapa and Toutain in Europe. In the last few years he works as a ‘house artist’ for French publisher Delcourt, for whom he works on a number of serials simultaneously – L'histoire secrete, L'Coeur des batailles, Empire, Taras Boulba. Most of his recent projects deal with historical subjects, chosen mainly because of his extremely anti-war stance, but from time to time he tackles other themes – science fiction, dystopia, like Smoke , L'idole et le fleau, or  fantasy, like his newest project Keltos.

Other than comics and illustrations, whenever he can, Kordey does graphic design, such as logos, posters and CD covers. He has received many comic nominations and awards. He lives in Zagreb, Croatia.