The witty banter between a frustrated penguin and his cool and collected companion, Bear Blackberry, by Danko Dikic. 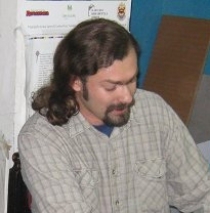 The scriptwriter of this comic strip, Marko Stojanovic, was born in Leskovac, Yugoslavia, in 1978. He works as a professor of English language. He also works as a comic translator, scriptwriter and artist. With Srdjan Nikolic Peka, he leads a comic school “Nikola Mitrovic Kokan” in Leskovac. Stojanovic is the editor of the comic magazine Strip Pressing. He is the founder and co-organizer of the "Balkans Comic Festival" in Leskovac.