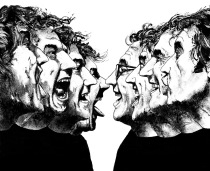 Alem Curin (Ćurin) was born in Split, Yugoslavia, in 1953. He began studying at the Academy of Fine Arts, but abandoned his studies to pursue his artistic career. He was a designer in the Croatian National Theatre and an illustrator at the newspapers Nedjeljna Dalmacija and Feral Tribune, all in his native Split. Curin has worked on original and non-commercial comics, but also collaborated on several projects with Alex de Campi for "Dark Horse". Besides comics, Curin mostly works as an illustrator and graphic designer. He is also the author of the well received Egostriper (2011), a book with essays about comic book heroes and authors that were important to him during his childhood. He received a Grand-prix at the Belgrade International Comics Festival in 2008.