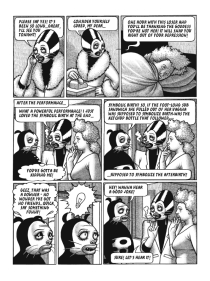 Nina’s short stories collect some of Nina’s less known works, but her unique style remains the same throughout. Her drawings are precise, detailed and realistic, but sometimes with a glimpse of fantasy and grotesque. Nina’s stories are influenced by her past experiences and her characters are strong and vulnerable at the same time. Her female characters in particular are non-conformists and raise a strong voice against the treatment of women in urban societies. The openness and pain in Nina’s stories will not leave you untouched.